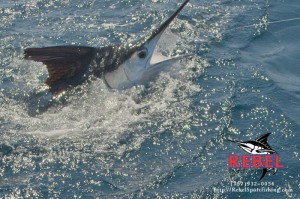 This newspaper article is about a Virginia Beach offshore charter fishing trip we we caught 30 white marlins and 3 blue marlins on the The Rebel.

It’s one of those rare occurrences – that day when everything seems to go right, resulting in the catch of a lifetime.

It’s usually a lone angler or a group of them on a single boat.

But lately off the coast of Virginia, it has been a bunch of anglers and a multitude of boats. And instead of a single day, it has been more than a week.

White marlin have shown off Virginia Beach in record proportions. They are bunched up, they are hungry, and anglers have been taking full advantage.

It seemed pretty amazing a week ago Friday and Saturday, when nine boats competing in the Big Money Open caught and released a grand total of 143 white marlin.