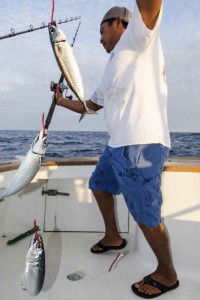 Saltwater Sportsman wanted to know how The Rebel catches SO MANY FISH and Capt. Randy obliged.

When I saw the flags, my jaw dropped. I tried to count them, but there were too many. Later, Capt. Randy Butler confirmed that 50 marlin flags decorated the riggers of his Virginia Beach charter boat, Rebel. In less than 24 hours, Butler and his crew had scored more white marlin than most anglers catch in a lifetime. When other boats returned to port flying just two or three flags, Butler had 50. What was his secret? Live bait.