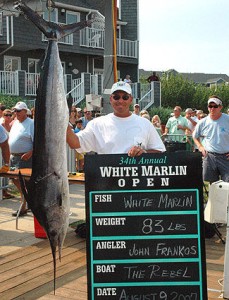 Team Rebel brings in a 83-pound white marlin earning them the top prize of $1.4 million at the White Marlin Open in Ocean City, MD. Below is a link to a story from The Virginian Pilot.

For Beach team, one white marlin is worth $1.4 million

The afternoon wait was much tougher than the morning, spent shaking off the effects of a late-night celebration.

That’s because $1.4 million was at stake.

John Frankos on Thursday had taken the lead in the 34th annual White Marlin Open in Ocean City, Md.

The reality of what the Virginia Beach man and his teammates were about to do hadn’t really set in as the crew joined the marina party of more than 1,000 people waiting for the final result.